All opposition parties’ leaders had suffered defeat on FATF legislation, he said while talking to a private news channel. The opposition parties proposed such amendments in the NAB act which were meant to weaken the national anti-graft watchdog, he said.

According to the report of Baaghi TV, Federal Minister for Information Sheikh Rashid Ahmed has said that Maryam Nawaz’s... read more

TLP has Spared no Effort in Making Lahore a Time Bomb of Corona: Fawad Chaudhry

According to Baaghi TV, the funeral prayers of Allama Khadim Rizvi have been offered at Minar Pakistan today. People... read more 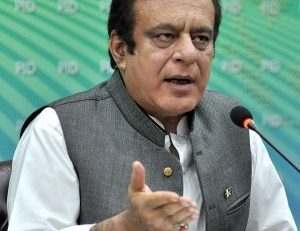 Nawaz to be Brought Back and be in Prison by January 15: Shibli Faraz

PESHAWAR, Nov 22 (APP): The PDM leadership has put lives of thousands of people in danger by holding an... read more

Washington, Nov 4 (AFP/APP): Despite retaining the House of Representatives, the path for Democrats to flip control of the... read more

Lahore, 30th November: Authorities deploy containers and register FIRs against the PDM to hold a rally in Multan today. According... read more